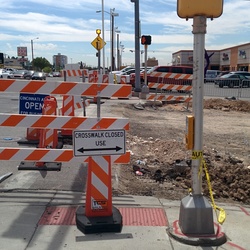 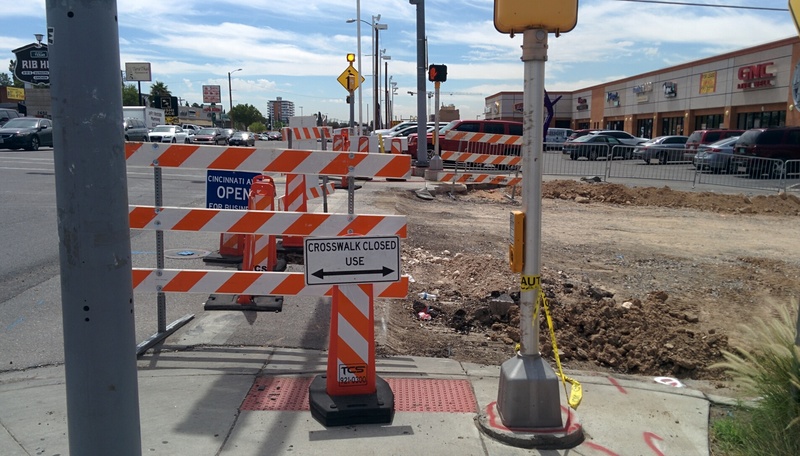 Imagine you're driving down the road and suddenly encounter barricades.  No detour signs.  No directions.  Just “Road Closed.”  What would you do?  Well, those of us who walk and/or ride bicycles know that feeling all too well.  With all the recent construction we are – unfortunately – accustomed to such obstructions.  A barricade, a fence, caution tape blocking our path to indicate the sidewalk, the crosswalk, or one of our far too rare bike lanes is closed to accommodate construction.  We're all happy to see new development, and better roadways, but how are we supposed to get around the construction?  If we are lucky, there's a sign that says go there...  Problem is, you do that and then there's no sign saying where to go next.  Or worse, there is another sign, and it says to go even further out of your way.
We experienced one such excessive detour not long ago as part of a – wait for it – Pedestrian Friendly project!  To get from one side of Cincinnati Street to the other (as was common before they tore the street up to make it pedestrian friendly) we were directed to cross Stanton, then Cincinnati, then the crosswalk back was closed so we were then to walk a block north to Baltimore in order to re cross Stanton, and then walk back that block to get to the other side of the street.  What was once a simple 50 foot crossing was now perhaps ten times that far. Yes, 10 X that far because it was easier for the contractors to tell people to take an unreasonable detour rather than install a temporary ramp that would had shortened the route dramatically, and made it ADA accessible.  Human nature says we're not going to go all the way around.  And people weren't.
People we're ignoring the signs that some well meaning expert (who clearly never spends more time out of their vehicle than absolutely necessary) had put in place as part of the “official pedestrian route.”  That might suffice for planning documents, but it actually puts people at risk because we tend to walk/ride/drive the route that we believe will be quickest.  When you come up to that sign saying the sidewalk is closed, and you look to see where that alternate route might take you, and you see a direct route, we're most likely going to take that direct route, even if it puts us in harms way – because we don't want to spend the extra time, or travel that extra distance, just to take the supposedly safe way around.  We want to take the direct route.
That's why walk/bike friendly cities actually require construction projects to plan, budget and actually install safe routes for people to make sure they can easily make their way through construction zones.  And it's not as there there isn't standardized guidance available, the Manual for Uniform Traffic Control Devices (or MUTCD for short) which is a kind of bible for transportation and construction planning has a whole chapter dedicated to Temporary Traffic Controls, including guidance for creating safe routes for people who walk, ride, or have disabilities to make sure they can pass safely.  Unfortunately, it appears El Paso thinks this is optional.  In other words, you can plan for people by not planning safe routes for them.  Just put up a sign saying you can't go here, and you're done.
Over the past couple of years, we've called out numerous instances where contractors had unnecessarily blocked crosswalks, sidewalks and bike lanes, or failed to provide safe routes for people that did not cause pedestrians to have to interact unsafely with traffic.  In some cases, the specific issue we called out was addressed, but as with our most recent concerns (and we did provide specific suggestions how to easily remedy the situation) we got responses like:

“Staff reported that they are aware of the concern and are reviewing the pedestrian pathways to make any adjustments, as necessary.”

Does that sound like “staff” are actually concerned?  We don't think so either.  To their credit, a temporary ramp we requested was installed, and a temporary crossing was added along Mesa, but that was only after we complained, and ABC7 did a story about our concerns.  But that still means there are still more temporary routes needing to be installed, not just as part of the Cincinnati project, but at every project.  The problem is “staff” will address specific concerns, but refuse to see the systematic failure to provide safe alternate routes.  Or to put up scaffolding to protect people from work overhead, or to not put signs warning of upcoming construction in the sidewalk or the bike lane, or...  Well, it comes from a disregard for the needs of people to actually reach their destination safely, without having to go too far out of their way.
In theory, every road and construction project is supposed to include a Temporary Traffic Control Plan, we just want to know if they do, and if they do, who is responsible for making sure they actually include safe, accessible routes for people.  If not, who are these “staff” who apparently don't believe we need to make our streets, in and around construction zones safe and accessible for all people, of all ages, and all abilities?
We shouldn't have to be doing the Cities work for them – pointing out when contractors are putting people at risk, either because they didn't put in safe, accessible routes through/around the construction, or because they weren't required to plan for it in the first place.
...and that's just during the construction.  The final product we get is often worse.  But that's an issue for another day.
#DemandBetter
- - -
The single best investment you can make to improve conditions for people who walk and bike El Paso's border region is to become a member of Velo Paso Bicycle-Pedestrian Coalition today at http://www.velopaso.org/membership