The Guardian- On the Verge of Carmageddon November 7th 2016

Our Roads are Choked On the Verge of Carmageddon by George Monbiot Car use takes a huge toll on our health and on the planet. We need to kick our addiction to driving.

It was a mistake – a monumental, world-class mistake. Cars for everyone was one of the most stupid promises politicians ever made. Cars are meant to meet a simple need: quick and efficient mobility. Observe an urban artery during the school run, or a trunk road on a bank holiday weekend, and ask yourself whether the current system meets that need. The vast expanse of road space, the massive investment in metal and fossil fuel, has delivered the freedom to sit fuming in a toxic cloud as your life ticks by.The primary aim has become snarled up with other, implicit objectives: the sense of autonomy, the desire for self-expression through the configuration of metal and plastic you drive, and the demand for profit by car manufacturers and fossil fuel producers whose lobbying keeps us on the road rather than moving along it. 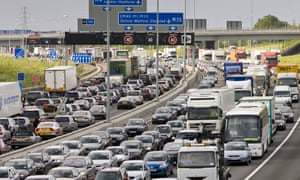 Traffic at a standstill in both directions on the M25 motorway. ‘Cars for everyone was one of the most stupid promises that politicians ever made.’ Photograph: robertharding/Rex Shutterstock
How to reduce the risks of carmageddon
Letters: Those who want to use bikes simply as transport are largely still forced on to the highway – nearly always shared with heavy traffic
Step back from this mess and ask yourself this. If you controlled the billions that are spent every year – privately and publicly – on the transport system, and your aim was to smooth the passage of those who use it, is this what you would do? Only if your imagination had been surgically excised. 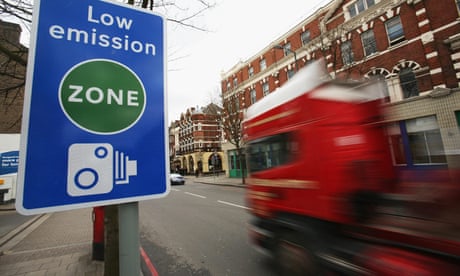 Even in a small, economically mature, densely populated nation like the UK, where change is easy, we’re still driving in the wrong direction. The government boasts that car use is rising again, after being knocked back by the recession. It is spending £9bn of our scarce money on roads every year, 70% of which is on new capacity. Thanks to the cuts, bus services supported by local authorities reduced their mileage by 10% last year.Over half the car journeys people make in this country are less than five miles: this is what policy failure looks like. Why don’t people cycle instead? Perhaps because, though the number of motorists killed or seriously injured has fallen sharply, the number of cyclists killed or hurt on the roads has climbed since 2003. This now accounts for 14% of all casualties, though cycling amounts to only 1% of the distance we travel.The simplest, cheapest and healthiest solution to congestion is blocked by the failure to provide safe transit. Last year the transport department crowed that it could cut £23m from its budget as a result of an “underspend on the Cycle Cities Ambition budget”. Instead of handing this money back to the Treasury, it should have discovered why it wasn’t spent, and ensured that it doesn’t happen again.The undercapacity of the roads arises from the overcapacity of the vehicles that use them. Average occupancy of cars in the UK is 1.6; and it seems to me that the bigger the car, the fewer people it tends to contain. With a few exceptions (such as Mayor Sadiq Khan’s plans for London), almost nothing is done to change or challenge this.When a major feeder road was resurfaced in my home city, I heard people complaining that it took them an hour and a half to travel two miles to work. They could have walked in half the time, or cycled in one-tenth. The council had a perfect opportunity to intervene, with notices beside the road urging people to switch to two wheels or two feet. But it sat and watched, as trapped in its mindset as people were in their cars.Our problems are dwarfed by what is happening elsewhere. Global car production has almost doubled in 10 years. The number of cars on the planet is expected to rise from 1.2bn to 2bn by 2035. Carmageddon beckons: a disaster for the climate, public health and our quality of life. Yet it is still treated as an indicator of economic success.We are told that this is about choice. But surely there should be a hierarchy of choice: the choice of whether or not to suffer a premature death should take precedence over our choice of transport mode.Our brains are filled with metal particles, our children’s lungs and mental development are stunted, and an epidemic of heart and lung disease is catalysed – all to grant people the choice of stewing in a traffic jam rather than getting there by other means.In a recent YouGov poll in Britain, 76% of respondents opted for clean air zones in their cities, enforced by taxes and charges. Sorry, wrong kind of choice.

So here’s a novel idea: how about a 21st-century transport system for the 21st century? Helsinki is making public transport as convenient and flexible as private transport. For example, by aggregating people’s requests via a smartphone app, minibus services can collect people from their homes and deliver them close to their destinations while minimising their routes. Hamburg is building a networkof cycling and walking paths so safe, pleasant and convenient that no one with the ability to do otherwise would want to take a car.Let’s set a date by which no new car is manufactured unless it’s electric. Let’s set up household charging points, allowing people to plug in without having to take their car off the road. Let’s introduce a scrappage payment, not to replace old cars with new ones but to replace old cars with no car at all. It would take the form of public transport tokens.
How about facilitating “walking buses” to school, with parents taking turns to lead a crocodile of children? How about local drop-off points, so that parcel companies don’t clog our streets and we never miss deliveries? How about providing bikes for hire at stations, and – yes, I believe in miracles – synchronising bus and train timetables?Let’s reopen old rail lines closed in the mistaken belief that train travel was on the way out (it has grown 74% since 1995) and build new lines to bridge the gaps. Let’s bring train services under public control and use the money now spent on road-building to make tickets affordable for everyone.Let’s implement the brilliant plan proposed by Dr Alan Storkey for an intercity bus network faster and more convenient than car travel, using dedicated lanes on the motorways and interchanges at the motorway junctions. Let’s build new settlements around public transport hubs – light rail, tram and electric bus systems – rather than around the car.What is difficult about any of this? What technological barriers stand in the way? None. Transport is among the simplest of our problems to solve. Yet our governments are stuck in a 20th-century gridlock, still committed to their great mistake.

Our Roads are Choked