-
As many El Pasoans are aware, the $97 million El Paso Streetcar Project is coming to fruition in 2018. The route is slated to run nearly five miles, in two loops running downtown and uptown with 27 stops along the way. From a bike rider’s perspective, maintaining cycling safety around the tracks can at times, literally be a slippery slope. Many experienced urban riders have already sustained injuries due to crashes in and around the tracks, as most of the usual bike routes through the city and around the UTEP campus now run parallel to the streetcar project. In even just a short trip downtown, cyclists are forced to cross or ride parallel to the tracks due placement and other obstacles (e.g. traffic, buses and parked cars).

Of particular concern are instances in which bicycle tires become stuck in the track’s “flangeways” (gaps in the road surface alongside rails) or when conditions are wet and tires slide in or simply lose traction on the track surface. This is especially dangerous when traveling downhill at high speeds and when turning to cross the tracks - at any angle. There are several downtown intersections that have no warning of the tracks a rider will encounter (see below photos) which adds to the difficulty and danger inherent to navigating El Paso by bicycle. Hazardous routes and unsafe conditions created by the addition of the streetcar tracks serves to demotivate and intimidate bicycle users, especially beginner riders, families with children, or visitors that may be interested in renting SunCycle bikes to explore downtown.

A 2016 study of streetcar track-related bicycle crashes in Toronto reported that crashes were more common on major city streets with parked cars and no bike infrastructure, which describes nearly all of the downtown avenues in El Paso. As per the design of the City, the El Paso Streetcar runs on shared roadways rather than having a dedicated rail right of way, which means cyclists on these streets will be forced into making quick decisions and sudden safety maneuvers around the tracks to avoid other accidents. Since the City has no apparent plans to make these routes safer (e.g. creating physically separated bike lanes, protected intersections, installing proper signage etc.) or to create connected, alternate safe routes for cyclists around El Paso, the responsibility once again falls to us, the commuters and recreational cyclists of El Paso, to watch out for our own safety, especially in the downtown area.

Ways to be a smart cyclist around tracks include knowing and planning your routes, riding a bike with thicker tires (though anything less than a fat bike is still prone to getting caught), using lights at night and of course, wearing safety gear such as helmets and gloves. Crossing tracks at a perpendicular angle (optimally between 45-90°) and performing two-step left turns are other ways to avoid crashes, but far from error-proof and can go wrong in seconds during an unexpected maneuver or in inclement weather conditions when road surfaces are slick.

Furthermore, why should 100% of the responsibility fall to the non-vehicular road user? Although there are no formal design guidelines, there are numerous infrastructure examples and studies from cities around the world that include multi-use safety measures – basic research that could have been integrated into the City of El Paso’s design from the start. Even if our current infrastructure does not allow for creation of protected bike routes, the City could look into rubber flangeway fillers that provide a level surface for bicyclists but which the streetcar can safely pass over. At the very least, an awareness campaign including proper signage or route designation (see video) would certainly help alert unfamiliar riders how to safely interact with streetcar tracks, but again this method isn’t foolproof and still doesn’t remove the inherent danger that shared roadway designs pose to bicyclists.

While we welcome an alternative to driving between attractions in El Paso and look forward to lightening the traffic load during downtown events, we can’t help but feel as though the lack of proper consideration for cyclists and non-vehicular users is an egregious infrastructure planning error on behalf of the City of El Paso and the Camino Real Regional Mobility Authority.

-
Have you experienced a crash and/or sustained an injury due to the El Paso Streetcar Project? Let us know by emailing info@velopaso.org or submit a comment under “Contact Us” page. Remember, the single best investment you can make to improve conditions for people who walk and bike El Paso’s border region is to become a member of Velo Paso Bicycle-Pedestrian Coalition today at http://www.velopaso.org/membership.
-

Video: How to Properly Cross Rail Tracks on Your Bike 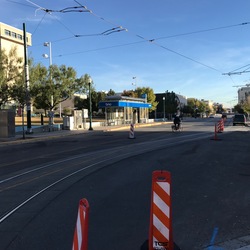 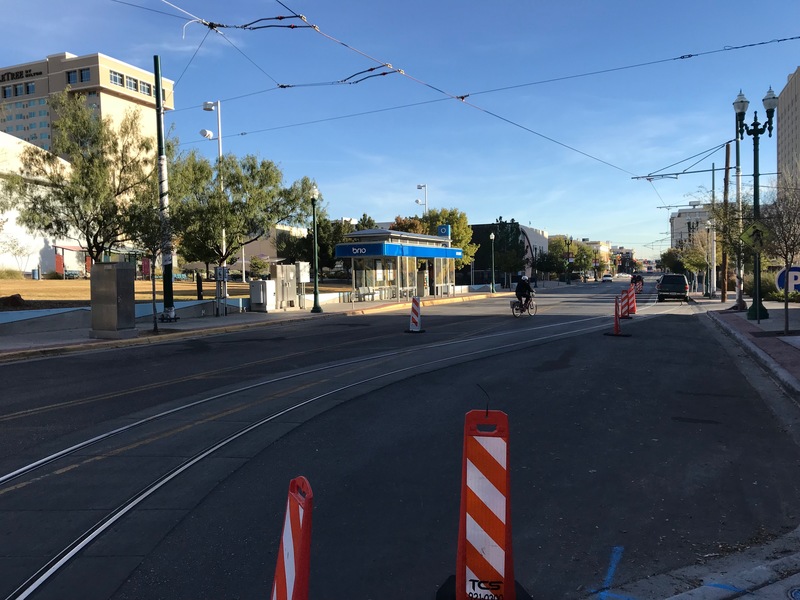 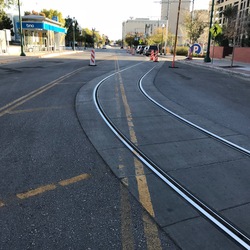